How to choose the perfect carb cap for your quartz banger

Choosing the perfect carb cap for your banger

Choosing the right carb cap for your new quartz banger can be a daunting task. Especially if you have an odd sized banger size. But don’t worry we are here to help. When looking for the right pairing for your banger we will focus on three key areas. 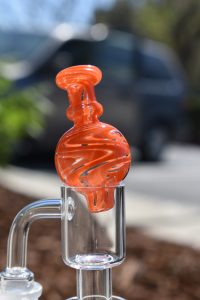 First and most important is the FIT, if the cap doesnt fit your banger it won’t work not matter how dope the function of the carb cap is, so we have to make sure we measure our banger to make sure we are getting the right size. We will have to measure a few key points.

So for this example we have a inner diameter (ID) of 17mm so any cap that is smaller than 17mm will not fit.

Now that you have measured your banger we can pick the correct functioning cap for your setup.

Carb caps fall under four groups, each with their own unique properties

–  Classic Carb Caps, these caps were the first caps on the scene and still play a role today. They will feature a simple design and are more stationary they allow you to control the airflow in your nail.  Classic carb caps will look like paddles, and cones, they generally won’t These caps are best suited for classic domeless nails, and classic slanted club bangers.

– Directional Carb Caps, these caps feature a air nozzle that is meant to be spun around creating a whirlpool of air inside of the banger. This will direct the air to the pooling wax inside the banger so it can be pushed around and evenly burned. Think of scrambling eggs and moving the eggs around in the pan. This is the same idea. These caps are best suited for flat top bangers, gavels, thermals, and most newer style bangers.

–  Riptide Carb Caps, these unique caps feature a twisting airflow disc that spirals the air in a circular motion, similar to the directional cap it will generate a a whirlpool effect except that you don’t have to move the cap around, the riptide filter will create that effect for you. These caps are suits for gavel bangers and a meant to be paired with terp pearls. The pearls spin around the banger and help agitate the wax and promotes even burning. Plus it looks damned cool!

– Specialty Carb Caps, these caps are specially designed to work with a specific banger. Bangers like the orion, terp-cycler and trough bangers requre their own unique carb caps as they have an odd shaped design.

The last step is the flair this is the where your personal taste comes into play, if you have your rig already picked out that makes it really simple to match a cap with it. You can color match it or do a color contrast selection.  If you don’t have a rig picked out a safe bet would be a neutral color like white, black or clear. These colors go good with any look.

Tagged carb cap, how to